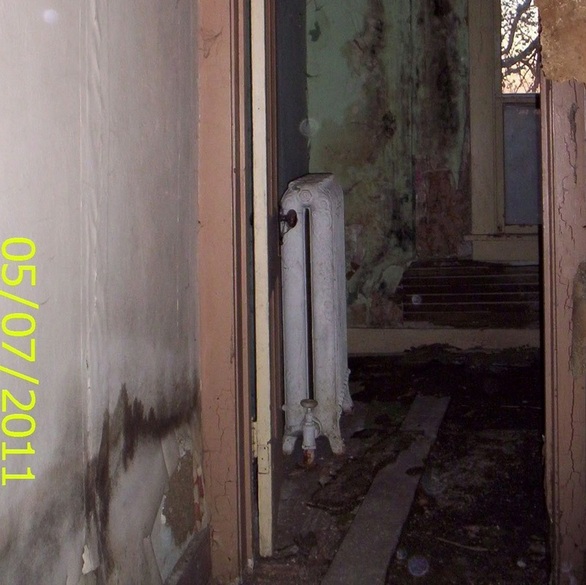 Of the multiple pictures taken, only one has orbs. Maybe dust… but they don’t appear in any of the other photos.

Investigation: The biggest obstacle during the investigation was the ambient noise created by the trains and highway traffic. Rick, Julie and Dennis arrived shortly before 8:00 pm All digital recorders were started simultaneously.
Investigators conducted an initial walk-through of the building, leaving one Olympus recorder in a room on the main floor in the northwest corner of the building, before setting up a "base camp" at the top of the stairs (in a common area within the vicinity of the majority of the second floor's rooms). One Sony recorder was left in the northwest corner second floor room; one Olympus and one Sony recorder were kept with investigators.
There is no electricity in the building; no K2 meter readings were observed.
Other than a few incidents of perceived movement in rooms behind them, investigators reported hearing and seeing very little.
Julie observed the smell of flowers. (It should be noted that there are flowering bushes on the building's lot.) She also reported an overall uneasy feeling while in the building and declined to take part in any future investigations at that location.

Findings: Upon reviewing the audio recorded during the investigation, numerous sounds were captured; ranging from thumps and pops to possible voices.
Some of the most interesting EVPs were captured downstairs; one seems to state a name in a gruff voice, one seems to declare in a youthful voice, "I-miss-you." At least two sigh-like sounds were captured, as well as several deep/low-toned sounds. By far the loudest sound captured was a banging on one of the antique iron radiators in the northwest corner room. Investigators did not hear the sound during the investigation, but it was captured on two recorders (in different locations).