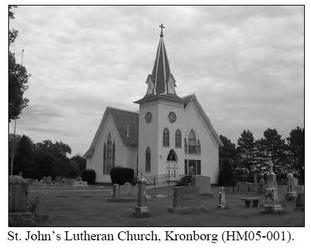 Kronborg is an unincorporated settlement at the corner of county roads 22 and T in Hamilton County, about three miles east of Marquette. The church was built between 1899 and 1915. Many of the headstones in the cemetery surrounding the church bear Danish-language epitaphs. The church and associated buildings are listed in the National Register of Historic Places. The St. John’s complex continues to dominate the area and serve as a focal point for the community.

Built between 1899 and 1915 in Kronborg, the St. Johannes Danske Lutherske Kirke is significant for its representation of a religious grouping of Danish-American buildings in Nebraska, and for its associations with the folk school philosophies of the Danish religious leader, poet, and historian N. F. S. Grundtvig. Many of the activities held in the church and gymnasium hall/school centered on the Grundtvigian teachings. The property is also significant for its instrumental role in the establishment and early development of a Danish-American community in the state. The church and its associated buildings played an important role in the religious beliefs, cultural traditions, and social activities practiced by Danish immigrants in the Kronborg community beginning in the late nineteenth century.

Anecdotal: Kronborg has never had a post office; mail has always been served from nearby Marquette. At the intersection where Kronborg sits, there is a big stone and wrought iron sign reading, "Kronborg Korner." There is also an old schoolhouse, a few old buildings, an old two story house, an old church in the middle of an old pioneer graveyard with some large headstones.

*I found it interesting that no one has posted anywhere a photo of the "Korner" sign; maybe it does not exist anymore... it sounds like an interesting place, and the church looks well-cared-for and beautiful (at least at the time the photos were taken).