The old Shelton-Pacific/Savoy Hotel (on Highway 30 in Shelton, NE) 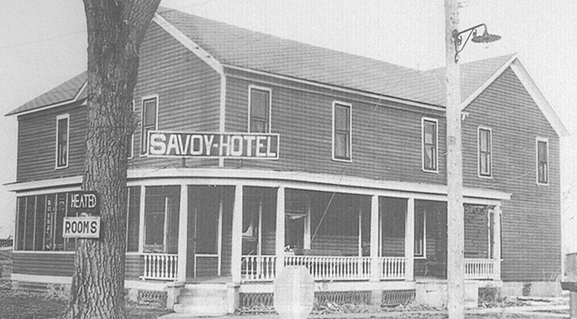 It is currently in the early stages of demolition, making way for a new car wash. Demolition began the second week of July.
July 2011:
The old Shelton Hotel has been a surprising treasure trove of experiences and information over the past two months!
The group has been privileged to be granted permission to do four investigations, each with impressive results – which will be posted as soon as time allows.
The increase in the number of digital recorders our investigators have at their disposal means the time required to review the audio also increases, but so far, it's definitely been worth the work!

Researching the Shelton Hotel’s history has been difficult with the limited time and resources of the group. What has been learned is that the building is most likely over a century old, and at some point was moved closer to Highway 30 (also known as the Lincoln Highway). During its existence it has been referred to by at least three names; Shelton Hotel, Savoy Hotel, and Pacific Hotel. In Adreas’ History ofthe State of Nebraska - Buffalo County, written sometime in the late 19th Century, A.D. Burrow is named as the proprietor of the Shelton Hotel.
Longtime Shelton resident and business owner, Richard Mathieson (part owner of the hotel) recalled the days when the hotel was in operation and joined investigators for a segment of the third investigation. He claims to have historical information on the hotel in his collections. More history will be posted when/if it becomes available.
The condition and years of neglect forced the local authorities to finally condemn the building about two years ago. It is in a very advanced state of decay; falling plaster, decaying wood, broken glass, various animal’s feces, scattered garbage, fetid carpets, perilous floors in every room - making the disguise of anyone’s approach almost impossible. All power was cut to the building approximately one year prior to these investigations.
NP has been fortunate to have permission from Mr. Mathieson to conduct four separate investigations at the Shelton Hotel;May 7, June 5, June 15, and June 22, 2011. Investigations were all conducted in the evening, during pleasant summer weather. Investigators for each session varied, but Dennis was a consistent participant in all four investigations.

Upon looking back on all four investigations, it almost seemed to investigators as if the energy in the building was lessened with each investigation; there were fewer and fewer prominent sounds captured on the recorders, etc.

Considering the two Class A EVPs captured, loud noises captured on recorders while no investigators were present, and the many vocal anomalies recorded... investigators feel compelled to agree that there would seem to be some sort of energy/presence in the Hotel. It will be interesting to observe whether the energy moves on once the building is gone, or if the energy will continue on in the same area; in the car wash, once it is constructed.